Update: This coupon is no longer available, however we have a new one in 2019 thanks to SelfAdvertiser’s push ads launch. Click here to get it!

I just came back from AWE in Barcelona and one of the main points I talked with a lot of people and some companies is automation.

Needless to say, automation is part of the future of media buys as bots can do things better than humans without falling into errors and emotions working 24/7. Obviously, there are still many things bots can’t do (creative side for example) but following rules to help with campaigns automation is something they do well so far.

I talked to a few companies and partners who provide auto optimizing features that connect via APIs to many networks (native and pops mostly) but those tools always come at a cost, so it’s always good to know when a network works in this type of automation internally so you can handle it without adding another layer and cost in to your usual operations.

SelfAdvertiser recently launched their new Auto Optimizer function. This is a network I use a lot to test and run campaigns with domain and pop traffic, so once I saw the new features a few weeks ago I was contacted by my manager to see if I wanted to test it and write about it.

Basically, this new function allows the algorithm to find the best bids from each website/source for your campaign in order to get the most volume possible in a profitable way.

Like any other network that supports this function, this feature relies on your tracker passing back conversion data so the traffic network knows where are your conversions happening.

Initially there’s a learning phase and once the process is done for every particular source, it will be optimized accordingly either adjusting the bids (high or low) and blocking the unprofitable sources.

Using the bid optimizer feature with SelfAdvertiser is easy within the SSP. You just need to create a campaign like you’d do any other time (can be either Pop or Domain) and once you scroll down you’ll see the following option:

This is a setting that can’t be changed in the future, so your old regular CPM campaigns can’t be converted to Bid Optimizer campaigns.

After enabling the bid optimizer you’ll need to fill 3 fields:

The rest of the campaign is filled as usual. if you don’t know how to setup campaigns in SelfAdvertiser check out this guide.

Finally, once your campaign runs and gets traffic you’ll see in your stats 3 different status for each source (website ID):

OK, so now that you’ve learned how to use the auto optimizer feature it’s time to run some campaigns!

So, the last couple years we’ve launched together a coupon for people to get started with SelfAdvertiser and it’s time we do it again!

By using the promo code “SRVNDOSELF18” while making a deposit you’ll get a $100 bonus to spend on ads! 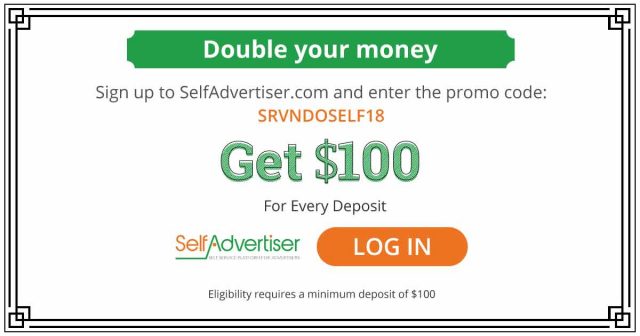 The minimum deposit is $100 (if you deposit $100 you get another $100 = $200), and this only applies for new accounts as it happens every year. If you’re new to pop/domain traffic or you haven’t tested SelfAdvertiser yet this is a great time to do so!

SelfAdvertiser has a traffic tool so you can check volumes available by device, geo and OS in their SSP and the minimum bid is now $0.2 in some countries so you can start testing while having higher ROIs (also great to use the auto optimize feature): 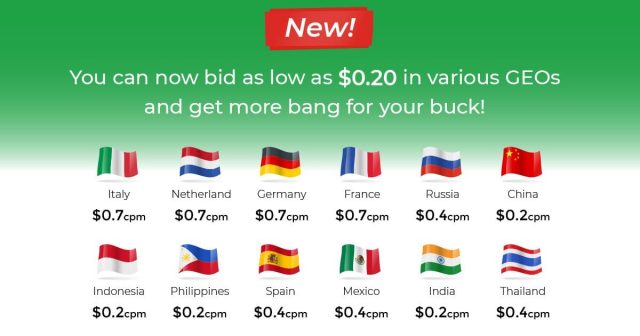 I like running both redirect and domain traffic with SelfAdvertiser. Domain can also work great for building audiences or running eComm products in branded typo domains so make sure to get creative and tests a lot of angles based on the keywords and volumes available there.

Make sure you use a tracker and use all of their tokens to get as much data as you can.

Special thanks to Diana (my manager) for arranging this promo for my readers 🙂 You rock!

Talk to you in the next one 😉